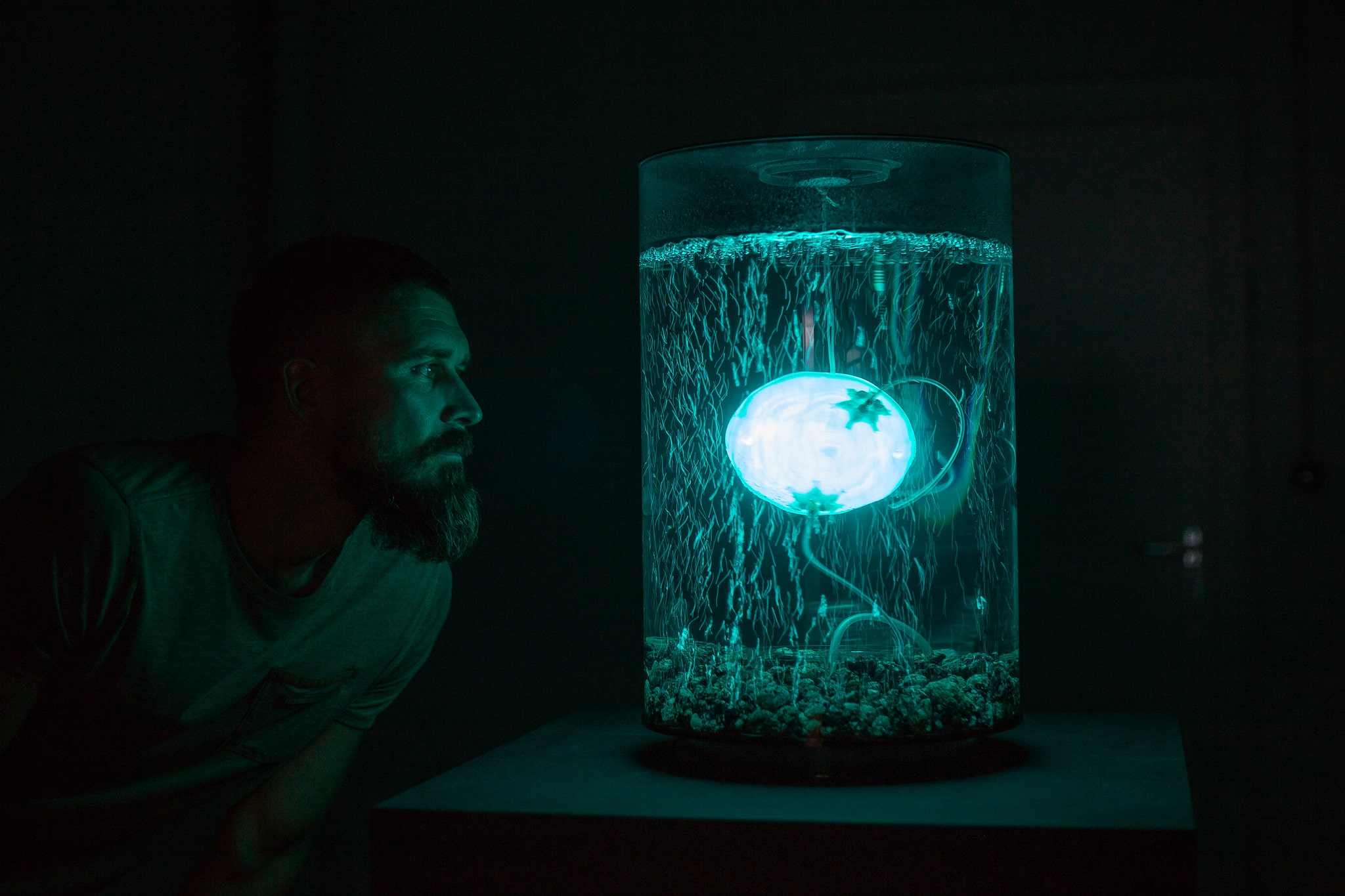 “ArchaeaBot: A Post Climate Change, Post Singularity Life-form” is an underwater robotic installation by Alex May and Anna Dumitriu that explores what ‘life’ might mean in a post-singularity and post-climate change future. Based on new research on archaea (a group of unicellular micro-organisms believed to be the oldest form of life on earth adapted to life in extreme conditions) combined with the latest innovations in artificial intelligence and machine learning, the artists have tried to create the ultimate’ species for the end of the world.

Furtherfield in London, UK
“ArchaeaBot” is on show as part of “Time Portals” which opened at Furtherfield on 9th May 2019 and runs until 20th October 2019.

HeK in Basel, Switzerland
The latest version of ArchaeaBot premiered at HeK (Haus der elektronischen Künste) in Basel as part of “Entangled Realities – Living with Artificial Intelligence“ from 9th May – 11th August 2019 with an opening on 8th May 2019.

IMPAKT, Utrecht, Netherlands
ArchaeaBot was exhibited at IMPAKT in Utrecht, Netherlands as part of “A World Without Us” from 23rd November 2018 to 3rd February 2019 alongside “Antisocial Swarm Robots” and with a showcase of “BioComputation Robots” also by Anna Dumitriu and Alex May in an exhibition curated by Arjon Dunnewind.

WRO 2019 Biennale in Wroclaw, Poland
ArchaeaBot was on show as part of the WRO 2019 Biennale “Human Aspect” which was open during the period of the 15th-19th May 2019 and ran until 28th July 2019. The exhibition took place in the Four Domes Pavilion Art Museum.

Anna Dumitriu and Alex May also spoke in the “Human Aspect/Non Human Aspect” conference programme at Wroclaw School of Art on the 17th May 2019.

Bandits-Mages, Bourges, France
From 15th November to 2nd December 2018 “ArchaeaBot” was on show as part of Rencontres Bandits-Mages “Unstable Reality and Shifting Knowledges: Mending the Fabric of the World” in Bourges, France, curated by Annick Bureaud.

To accompany the exhibition Dumitriu and May gave a talk “Collaboration Across the Three Domains” about their work at 6pm on 16th November and a collaborative practical and theoretical workshop about the ArchaeaBot project from 11am to 5pm on the 17th. Anna Dumitriu then lead a solo “BioArt and Bacteria” workshop on the 18th November. View the full festival programme here.

The event ran from 5:30-8:00pm with a series of discussions and visitors were able to experience the installation which in an exhibition at gallery until 11th October 2018.

Asturian Regional Television reported the opening of the exhibition on their lunchtime news show and interviewed the artists (Spain), September 2018.

El Comercio featured the opening event of the exhibition at LABoral, (Spain), September 2018.

The Japanese magazine Axis featured “ArchaeaBot” and an interview with the artists in their Report on the Ars Electronica Festival 2018, (Japan), November 2018.

Utrecht Central featured the presentation of “ArchaeaBot” in “A World Without Us” in an article “New IMPAKT in Utrecht”, (Netherlands), November 2018.

The work was made in collaboration with researcher/cryomicroscopist Amanda Wilson as part of the EU FET Open H2020 funded MARA project based in the Beeby Lab at Imperial College London, and the School of Computer Science at the University of Hertfordshire.

Supported by Arts Council England and through an EMAP/EMARE artists residency at LABoral Centro de Arte y Creación Industrial in Spain via funding from Creative Europe.